He had gone viral for pointing a gun at a police during the Delhi riots and the man who has been identified as Shahrukh has now been nabbed by the Delhi police. He was seen in the pic wearing red t-shirt who had opened fire as well. 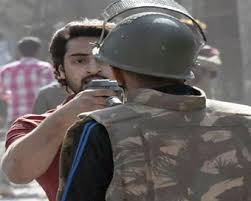 This happened during violence in North East Delhi on 24th February, The accused has been arrested by Delhi Police Crime Branch from Uttar Pradesh.

Former CM, her son quarantine themselves, this happened

Justice has prevailed, tweets Prime Minister, for this reason

Words of Wisdom on COVID19, Pakistan Governor suggests this

Forced to work in office despite COVID threat, police acts

High Commission thanks airliner for evacuation of stranded people

Hangman arrives in jail, for the execution of four men

Video of those quarantined in Pakistan goes viral

Allegation of opening of fire on people arriving, heres visuals