'My Body My Will' placards show up in Pakistan's Lahore

'My Body My Will' placards show up in Pakistan's Lahore as Aurat March or women's march was taken out today despit serious opposition by county's hardliners and fundamentalists. Many see it as Western style modernity being imposed and thus are aggreived that it might compromise their culture and religion. 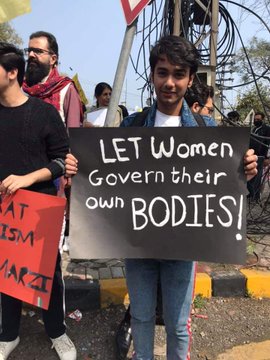 'What an atmosphere in Lahore! Despite the threats, participants in trememdous numbers turn up for the Aurat Azadi March 2020 to combat misogyny and raise their voice for the rights of women', said Bilal Farooqi, the well known journalist.

Whats is US afraid of, asks woman spokesperson

Why patient not screened at airport, asks journalist

Pakistan bats for lifting for sanctions against this country

Pakistani Charged with Attempting to Provide Material Support to ISIS

Justice has prevailed, tweets Prime Minister, for this reason

Words of Wisdom on COVID19, Pakistan Governor suggests this